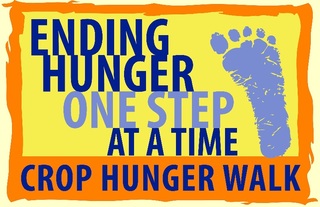 When participants gather for Naperville’s 2017 iteration of the CROP Hunger Walk on October 15, there will be no one more veteran than Grace Church’s own Phyllis Pepiot. She’s been a part of the event, and all the planning it takes to execute this annual project of Church World Service (CWS), for 35 years now.

If there was only one word to describe Phyllis’s participation, it would be something like “persistence.” She began logging steps for the annual event, which raises funds to end hunger at home and abroad, way back in 1982. As she completed the route that year, Prince’s party anthem “1999” — predicting an apocalypse at the turn of the century — was topping the pop music charts. Yet, because the Cold War was well into its second movement, some wondered if the world would even make it that far.

Nevertheless, Phyllis kept supporting CROP. She walked for CROP through the end of the Cold War, and kept walking. She walked right through 1994, when the silver screen’s Forrest Gump got tired and went home. She’s supported CROP through six presidents, five recessions, and two Chicago World Series Championships.

But, had it not been for the enthusiasm of her then 8-year-old daughter (and that daughter’s school-aged friend), she probably wouldn’t have even finished her first walk. It started raining midway through the 10k route that year — which made two circuits through Naperville. As they returned to the starting point, Phyllis asked her progeny if she wanted to quit and get out of the cold, fall storm.
“Oh, no!” she recalls her daughter saying, “We want to do the whole thing!”
So, they made the second lap, dripping from head to toe.  "It's amazing how heavy wet jeans are," Phyllis said laughing.

“It was the same distance many people in [developing countries] had to walk daily for food and water,” Phyllis said. “I figured doing it once was the least I could do.”

This unique solidarity of physicality had Phyllis digging deeper into the CWS event. She was also inspired by the community building portion of its mission, and the way it shares the money raised globally and locally. Currently, 25 percent of the pledges raised by walkers is given to the Northern Illinois Food Bank and Naperville’s Loaves and Fishes and Community Services.

Because of this approach to ending hunger — and her service to Grace Church through its hunger ministries —  Phyllis immediately became a part of the leadership team which organizes the annual walks in cooperation with representatives from CWS. And she’s done so ever since.

She’s seen the walk’s starting point move from downtown to the lower lot of Grace Church, which has also changed the way she participates.

“In recent years I just walk in the building getting things ready to help everyone else enjoy the experience,” Phyllis says, “but I usually get the same number of steps everyone else does. I just miss talking to the friends from the other churches I’ve made over the years.”

Now, the walk welcomes a third generation of Phyllis’s family, as her granddaughter participated last year and wants to do so again this year.

“It could be that she likes the little caveat at the end of a Colonial Sundae,” which is offered to all walkers, Phyllis said laughing, “but I think she also enjoyed the walk; she remembers why [the walk happens].”

Currently, Grace is one of a dozen churches that partner in the event by recruiting walkers and raising money and awareness of hunger issues. The Grace team has set a goal of $7,000 from its walkers this year. Those who’d like to do a 1k or 5k walk themselves can register on-line at (https://www.crophungerwalk.org/napervilleil).

Another way to participate is by making a pledge to sponsor Phyllis in her walk this year. To mark her 35th anniversary, gifts in multiples of $35 are encouraged and can be made at (https://www.crophungerwalk.org/napervilleil/ppepiot).

In 2016, more than 120,000 people worldwide participated  in the walk the CROP Hunger Walk and raised $10 million dollars.