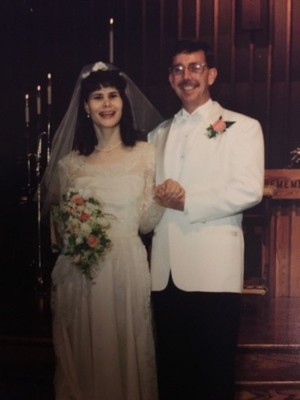 A Long Standing Tradition of Acceptance

Although I’ve only been a part of the Open Doors Ministry for three years now, I’ve come to understand that the belief in acceptance is and has been deeply rooted within the life of Grace. I’ve been so fortunate to hear from many members who have shared their experiences of acceptance and love and what those experiences have meant to them. One such story that deserves recognition and celebration was recently told to me by Barbara Hoch.

As parents of two children with special needs, Al and Barbara Hoch did not always feel their family was welcome in the community. Grace was an exception. Barbara shared that her daughter, Alison, grew up in the “old church”, experiencing all that Grace had to offer. She loved to sing, and as a kindergarten student, she joined the cherub choir. At that time, it was directed by Shirley Hoffman, described by Barbara as a “wonderful, wonderful person”. Shirley “totally accepted Alison” and readily accommodated her needs. Because walking down the aisle of the sanctuary would be Alison’s first obstacle in singing with her friends, Shirley suggested that Al and Barbara arrive to church early and sit in the front row. Alison could be seated with them, and easily join the choir for the songs.

Alison also loved Sunday School, and especially so when one of Grace’s first “buddy pairings” was formed. Beth Pletcher, daughter of Faye Pletcher, was a teenager who volunteered in the younger classes. She “took such a liking to Alison” that she wound up staying in her classes until college finally called her away!

Barbara described Alison as a dreamer, and shared that when she was in high school, she entered a writing contest in which she tenderly wrote about the best day she had ever had; the day she stood up in her sister’s wedding. Her paper ended with her dream that one day she might have a wedding of her own.

Meanwhile, also growing up in Naperville, was Tom Clapper. Although his childhood was a different experience than Alison’s, Tom was hit by a car when he was a senior in high school. This accident resulted in a cognitive impairment, and would eventually lead him to Alison.

As two young adults with special needs, they were both involved in Little Friends, where they were provided with supported living and worked on community skills. Tom and Alison lived near one another and became fast friends, eventually falling in love. 25 years ago, in May 1992, they were married at Grace.

The ceremony was beautiful and filled with joy. Howard Benson wed the couple, having always had a special affection for Alison. The ceremony was followed by a fabulous celebration in Fellowship Hall, where Barry Riskedal played his harp for them. Alison and Tom had realized their dream. Grace helped make it possible.

Barbara ended her story by telling me, “I can’t tell you how proud of this church I am, and every year, it just keeps getting better.”

Please come celebrate with Alison and Tom, Sunday, May 21. The Open Doors Ministry will be providing cake in the Activity Center, Barbara will bring some wedding photos, and Alison and Tom may just share some of their secrets to a happy marriage!

*If you are interested in more information on the supports that Open Doors Ministry can provide or how you can become involved, please e-mail Nicole Zaccaria (nicole.zaccaria@peopleofgrace.org).