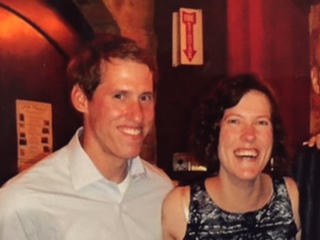 It was early 1984 when my otherwise uneventful pregnancy turned into something of a miracle.  At 20 weeks gestation my ultrasound showed that there were 2 babies, not one. Unbeknownst to either of us, there was a history of twins on both sides of our family. Doug and I were both excited and frightened.  We already had a 2 year old and an almost-6 year old. On March 12, 1984, I went into labor while at work at Highland Park Hospital where I was the Senior Medical Technologist in the hospital Transfusion Service (Blood Bank). I managed to drive myself to Evanston Hospital where I was scheduled to deliver my twins in July, not March.

On March 15, I gave birth to Stephen and Sarah at 26 weeks gestation, rather than the normal 40 weeks gestation. Stephen weighed 1 pound 14 ounces and Sarah weighed 1 pound 13 ounces. The next few months were extremely stressful.  There are many heroes in this story. The nurses and doctors were heroes for all the care that they gave to us, of course. But there are other heroes who will never know how much they were needed and appreciated. They were the blood donors who gave of themselves so that we would all survive. I went home after 5 days. Stephen stayed in the hospital for 3 ½ months and Sarah for 4 months.  Between the 3 of us we received blood transfusions from 55 blood donors, 2 for me, 20 for Stephen, and 33 for Sarah. There were many ups and downs during Stephen and Sarah’s stay in the Neonatal Intensive Care Unit at Evanston Hospital. We were all home by July 5.

I can never express how grateful Doug and I are to the unsung heroes who donated the blood that was used by the three of us.  Stephen and Sarah are now 33 years old. Stephen is studying for his second Master’s Degree at George Washington University, working full time in Washington, DC and is getting married to the love of his life, Emily Rose, on May 28.  Sarah has a Master of Fine Arts Degree in Playwriting from Ohio University, is an adjunct professor at Benedictine University and Prairie State College, a budding playwright, and a theater critic.

Please consider "Being Someone’s Hero" by donating blood at the Grace UMC’s Blood Drive on Monday, June 5, at 3:30 p.m. in Fellowship Hall. Become a regular blood donor.  It’s easy and only takes about an hour of your time.  You never know when someone you know  and love will need blood.  I have two miracles who are here due to the generosity of many blood donors.