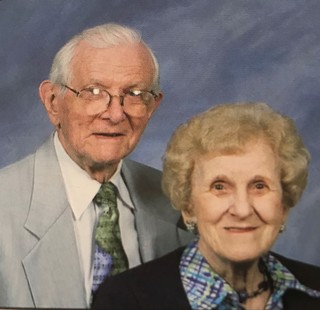 The Grace Foundation was recently blessed with a bequest from Juanita Burney. Juanita was a long time member of Grace Church. Juanita and her late husband Don met in their “Golden Years” and would attend church regularly while holding hands during the service. Pastor Michael Stoner joked with them that they should get married, and he took credit when they eventually did. Both Juanita and Don were very sweet, kind, and unassuming which made watching their love flourish even more special.

Grace Church was a vital part of their lives and faith. Juanita was actively involved in the UMW as a member of the Ruth Circle. She was also a member of the committee that published the 100 Years of Grace Cookbook in 1990.  Don served as the Church Treasurer for many years. Following his death in 2013, the Grace Foundation was named as the beneficiary of a life insurance policy, Don had from his work at BP.  This bequest allowed for the establishment of the Don and Juanita Burney Endowment.

The Burney Endowment is a principle retained fund so that the income from their gifts will support Grace’s ministries for generations. Juanita and Don’s gifts are a testament to the love they shared, and their strong commitment to their faith.  Grace Church has a long history of involved, generous founders and supporters. With gifts, such as that of the Burney’s, we shall continue to fulfill God’s plans for us. If you have any questions about the Grace Foundation, please contact Scott Oats (soats@sbcglobal.net) or (630-355-1748).