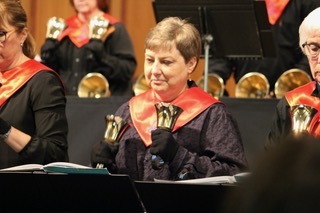 Cheryl Ameiss is one such person.

When asked to list the ways in which she has volunteered her time and talents to Grace over the 20 years she and her family have been members, a single piece of paper can barely contain them all. Yet, one thing resonates above the rest: music…more specifically, handbells.

Beginning in high school when she joined her church’s handbell choir, Cheryl’s love of the beautiful bronze instruments of various sizes and sounds has followed her all her life.

“I learned the most about ringing at Grace,” said Cheryl, who has attended multiple Young Ringers festivals and adult handbell workshops over the past two decades. To Grace Church’s benefit, her passion has inspired others, most notably our youth.

Attracted to Grace by our robust music program, Cheryl began her musical endeavors here by assisting former Children’s Bell Ensemble director Angela Sterchi. “I had two rambunctious boys at the time, and they were in the children’s bell choir,” she explains.

Not long after, Cheryl joined her husband, David, in our adult bell choir as well as the Chancel Choir as a vocalist. Over the years, she was also a member of the Grace Chamber/Evensong Singers under the direction of Dan Wagner, with whom she worked closely to organize various music events at Grace. Like her mother, Cynthia Rupp, she also played the flute.

No small task was Cheryl’s volunteer position as Grace music and choir librarian, in which she and others painstakingly updated and computerized our antiquated music filing system and, in the process, freed up enough space in the bell room for another set of bells.

Among Cheryl’s litany of contributions to Grace, directing the Youth Bell Ensemble (YBE) is probably her most satisfying.

Beginning in 2010 with the very capable “two Kristens” – Kristen Riedinger and Kristen Basgall – YBE strengthened Cheryl’s knowledge and love of ensemble ringing, though she and David and their sons, Ben and Nick, had experience ringing together as a quartet.

In time, YBE gained Karson Wehrli and Mark Froelich (the latter of whom Cheryl proudly watched perform in a recent Purdue Bells concert at Grace) and several more ringers. “They’re teenagers, so we had our moments,” quipped Cheryl, who nevertheless emphasized putting the success of the ensemble on the ringers themselves.

“They are the ones who have to push themselves and do all the hard work, whether learning the notes or new techniques, finding solutions to problems, or helping other ringers understand what to do.”

“Cheryl's dedication in running YBE encouraged me to become the best ringer I could be and really deepened my love of ringing,” said Kristen Riedinger, now 24. “She approached rehearsals with an enthusiasm and creativity that made it both challenging and fun. I'm so grateful for all of her hard work and encouragement that kept the group going. We couldn't have done it without her!”

When Cheryl was not making music at Grace, she was busy crafting items for another pet project, Mistletoe Marketplace. Her skillful hands also created many a prayer shawl, Lenten booklet devotion, captivating photograph, and several programs, banners, invitations, decorations, etc. for various events and celebrations. A regular figure in the Grace copy room, Cheryl was often mistaken for a member of our office staff.

“Many, many years ago, Pastor Bob [Atkins] once told me I was doing too much,” said Cheryl, who, after many years of service, is stepping down from directing the YBE. Debbie John, current director of the Children’s Bell Ensemble, will take her place.

“I told him (and I still feel this way), ‘God gave me many talents and abilities; why shouldn’t I share those with others, especially in His name?’”