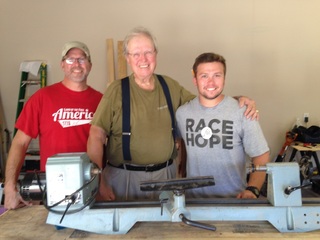 The crosses that youngsters at Grace have been receiving upon confirmation for the past six decades are made not only from wood, but from generations of family ties to Grace Church.

Following a tradition begun in the 1960s by his father, Merrill Gates, Terry Gates took over crafting the crosses in the early 1990s. Now Terry’s grandson, Nick (a professional wood craftsman with his own company, Heirwood Customs), will take over the storied helm. The name of Nick’s company is an homage to generations of Gates woodworkers. In addition to his father and grandfather’s avid hobby, Nick’s maternal great-grandfather was a professional woodworker.

Acknowledging that Nick may change the material and design of the confirmation crosses he crafts, Terry said that, to date, they have all been made from the rich walnut wood of local trees collected by his father, aged and air-dried since the 1970s.

“I feel great that this tradition is being kept alive. I have such a warm spot for Grace,” said Terry, a retired college professor of instrumental music who grew up in Grace Church and is now residing with his wife, Mary, in the St. Louis area after years of teaching in New York and other states across the country.

“I caught the woodworking bug from my dad and learned the skills from him,” Terry added, noting that woodworking was a needed diversion for Merrill, who was superintendent of schools for DuPage County for 20 years. In addition to countless confirmation crosses, Merrill also crafted several other items for Grace, including an engraved church sign outside our then newly built building.

The Grace grain runs deep: Terry’s mother, Beatrice Givler Gates, was Grace’s organist for 26 years. She and Merrill are recognized on a plaque in the sanctuary for their lifelong service.

Said Grace Youth Director Gaye Lynn Loufek, “It has been my distinct privilege, joy and great blessing to work with Terry for the past 20 years. We have become more than acquaintances; we have become friends. Thank you, Terry, for your dedicated service. You and your craftsmanship will be missed, but we look forward to carrying on the tradition with your grandson!”

Indeed, when we celebrate our current confirmands on May 1, let’s keep in mind the Gates’ legacy of service honed in love for God and the people of Grace.