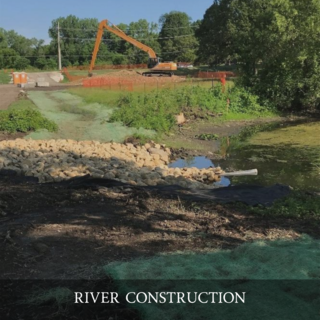 Construction Along the River

By Betty Long, Board of Trustees Member

The City of Naperville has contracted for a Riverbank Stabilization Project from Gartner Road south to Abrahamson Court, and the project is well underway. Parallel to the river runs a 36” interceptor sanitary sewer line, and erosion along the northeast riverbank was threatening its stability. It would be an environmental disaster if it leaked into the river. The principal reason for the project is to preserve this sanitary sewer line, now and into the future.

Most of the trees along the bank have been removed, and the bank contoured to a more gradual slope. Large rock cobbles have been added. Above the rocks, the banking will be seeded with native plants that develop deep roots to hold the soil.

Grace Church granted the City a construction easement for the contractor to store equipment and materials on our field. On our property, the pond had eroded against the interceptor sewer pipe, as well, and was draining around—not through—its outlet pipe. In a cooperative spirit, this is also being addressed by the City as part of the project.

The project has been completed and our field has been restored!