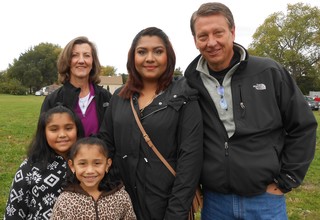 Approximately one year ago, Grace embarked on a journey with Fox Valley Habitat for Humanity to build a house in Aurora.  A single Mom with two daughters had completed an application and had been accepted to be the recipient of a Habitat house.  Fox Valley Habitat had a vision for bringing churches together to build that house and thus FaithBuild 2017 was born.
(Rubi Mata and her daughters with Rick and Gaye Lynn Loufek)

Grace was on the ground floor of the project, agreeing to supply the lead volunteers on the construction team.  Led by Rick and Brentley Loufek, the first nails of the project were hammered on April 17, 2017.  Twenty-one other churches joined the project in one way or another. With everyone working together it wasn’t long before Rubi Mata and her daughters began seeing their new residence take shape. Several months, many volunteers, and a lot of team work produced a home ready to be dedicated on Saturday, December 2, 2017.

It truly does take a village to raise a roof, raise a child, and change a community.  Fox Valley Habitat had a vision for bringing a village together to create a new community of faith to build homes.  Thank you to all of you who have supported FaithBuild 2017!

FaithBuild 2018!
Want To Get Involved? Stay Tuned for More Details in Grace in Mission or contact Gaye Lynn Loufek (gayelynn.loufek@peopleofgrace.org)!