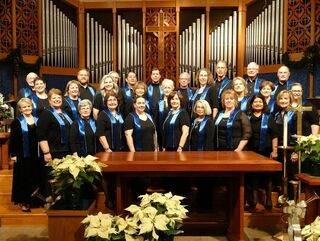 After 29 years, the New Life Singers is retiring. Sunday, November 13 will be the last Sunday they will be sharing music in worship. New Life Singers was formed in 1993. Arthur Landwehr wanted Gerrit Laning to be music director. Gerrit had been retired for 30 years from teaching music and did not want another full-time job. Arthur then came up with the idea to add a new adult music group. He said, “Let’s call it the New Life Singers,” and asked Gerrit to direct it. The first performances were a couple times before Christmas. Betty, Gerrit’s wife, accompanied and shortly after, Claudia Winterrowd took over and Betty sang alto. Gerrit directed New Life from 1993 until July 2001 when he retired. He continued to sing bass and tenor with the group for several years.

In September 2001 until June 2002, New Life Singers was directed by a church member Paul Grizzell. In September 2002, Sherrie Holdeman, soprano, took over as director, until present. Claudia Winterrowd has accompanied the group from almost the very beginning. In 1993, Betty Laning made vests for the ladies and matching ties for the men. In December 2002, the New Life attire was changed to black rainbow-colored stoles.

The group enjoyed fellowship and many celebrations. For many years, they had a kick-off picnic in September to begin the singing season coordinated by Sherrie and held in the Activity Center or the Fireside Room at church. While Gerrit and Betty were directors, birthdays were celebrated for choir members with a cake after Wednesday night rehearsal. Choir picnics were held at the end of the singing season every June. They were held at director’s or choir member’s homes, most recently at Jackie Tschirhart’s house, for the last 15 years.

New Life performed a Christmas Cantata every other year starting in 2007, with the last one being in 2019. In the springtime, New Life periodically visited retirement homes on Wednesday evenings to share their gift of music. The homes were Alden Courts in Aurora, Lexington in Lombard, Devonshire in Naperville, and Monarch Landing in Naperville.

Sunday, November 13 will be the final Sunday New Life Singers will sing during the 8:00 a.m. worship service. All current and previous choir members are invited to come and sing familiar anthems with the group. Many thanks to New Life Singers for blessing Grace and the community with many years of music ministry!