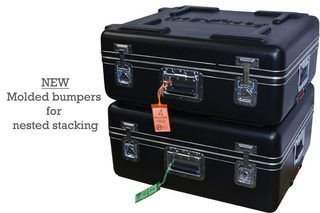 Grace UMC has received rolling cases for our 5 octaves of handbells in memory of Herbert Rupp. These new cases will allow safer and easier moving of the bells from the bell room to the Sanctuary and to workshops or other activities outside the church building.

Herb and Cynthia Rupp have been very strong supporters of our handbell choirs. Both Herb and Cynthia have enjoyed the harmonious sound of handbells since their daughter starting playing in high school.  Their family has been involved with ringing handbells in various forms for many years: in choirs, ensembles, and even in solos. They love sharing handbells with others.  Their daughter, Cheryl, is currently the director of Grace’s Youth Bell Ensemble and permanent ringer substitute for Grace Bell Ensemble. Even with advanced Alzheimer’s, Herb would ring one bell in complete rhythm of the director as the choir practiced.  He could not say a word, but he could ring a bell!

Cynthia wanted to give something to the church in Herb’s memory that was music related and something permanent.  The bells were played at Herb’s memorial service through the bell room windows to the Lacy Memorial Garden where his ashes were placed.  It is a sound and feeling the Rupp family will never forget.