Per Revised CDC Guidelines as of July 27, 2021, masks are required in all public spaces within the Grace UMC Building. 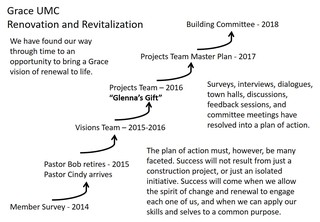 Our Grace Renovation Master Plan work is shaping up well, with key innovations coming into focus. If all goes, well we can expect to have significant construction underway during the summer months. Thanks to a lengthy but important series of visioning efforts and consequential debate and input from Grace Members, we feel confident that our plans are on a strong track for reflecting voiced interests and concerns as well as positioning Grace for a surge of growth and vitality in Naperville.

Stepping back a bit, we need to recall the member survey of 2014 just before the retirement of Pastor Bob Atkins. Those results revealed specific concerns and needs of our church and enabled the appointment of Pastor Cindy Marino to assume our Senior Pastor role and help us move forward. The Visions Teams were formed shortly after Pastor Cindy’s arrival in 2015 to transform the survey results into actionable recommendations to get us moving in the right direction.

Key objectives were characterized as:


The Grace Projects Team was formed in 2016 to take these recommendations and develop an approach to making things happen. Ideas and sparks flew as team members considered how to channel vigor and new energy for a new generation of Grace Members. When it became known that Glenna Holloway had bequeathed much of her estate to Grace Church, the impossible seemed plausible, and the plausible appeared do-able, and a vision of transformation was brought to light. The subsequent Grace Master Plan effort of 2017, working with JNKA Architects, a firm specializing in church renovation, developed some key ways to take the best advantage of our Grace building and grounds while addressing needs to achieve our objectives.

Two Town Hall sessions in late 2017 gave Grace Members a chance to review and critique renovation concepts and provided guidance for fine-tuning and honing ideas toward the optimum impact within a reasonable budget.  Several key areas have been highlighted for the renovation effort.