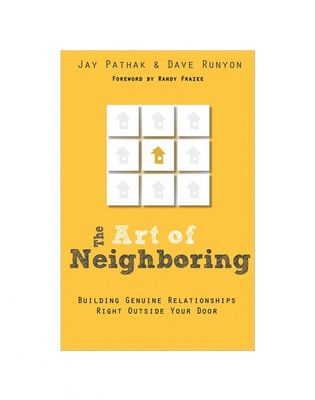 The Art of Neighboring

What if, when Jesus said, “Love your neighbor,” He meant we should include our actual neighbors—those who live next door and down the street?  What a concept!  But it’s not as simple as it sounds.

We live in a time when we are so ‘public’ throughout the day, it’s nice to have space in our homes that isn’t invaded or interrupted, right? I know all the excuses:  Our lives are packed. We have enough friends. Have you seen my to-do list? I can’t take on the neighbors, too!

“Many of the issues we face in our communities and our world could be reduced or even eliminated if we all knew how to be communities of great neighbors,” according to Jay Pathak and Dave Runyon, authors of “The Art of Neighboring.” We’ll be in conversation with this book through sermons and discussions for a few weeks in May.  This new series kicks off Mother’s Day, with the children presenting their musical, “A Not So Terrible Parable,” a story about the best neighbor ever, the Good Samaritan.

Lent was a time of deep reflection about what the church teaches, what we believe and why it’s important.  Now as we celebrate the risen Christ, we turn to the ways in which Christ calls us to live out those beliefs. Let’s start with those closest to home and then move into our world with God’s love, obeying the resurrected Jesus’ command to “Go and be my witnesses.”

Along these same lines, we’ll be offering classes using Adam Hamilton’s new study on Moses.  The study looks at the experiences of the Hebrew people as they found themselves foreigners in a land that once welcomed them, migrants in a hostile desert, and newcomers to an occupied land promised to them. The art of ‘neighboring’ became life’s lesson for them, as God helped them survive and formed them in love.

Don’t miss these opportunities to learn more about who we are in community and how simple changes can mean big differences for us and for those who might call us good neighbors.
Categories: small-groups, leadership, adult-formation