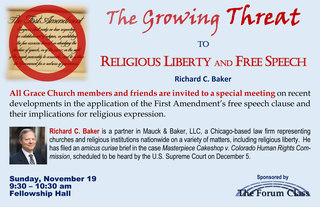 The Growing Threat to Religious Liberty and Free Speech

Free speech and expression of religious beliefs are increasingly threatened in ways not seen before in the United States. A growing number of colleges and universities, wishing to “protect” students from speech deemed offensive, have created environments that chill or ban both non-religious and religious expression. Some are following a recent trend to prohibit religious-oriented campus groups from selecting members and leaders based on their religion. At the same time, small business owners have been sued for declining to offer services that express beliefs that they consider to be offensive to their religion.

Please attend a special meeting sponsored by the Forum Class on “The Growing Threat to Religious Liberty and Free Speech” in Fellowship Hall on November 19 from 9:30 to 10:30 am. The session will be led by attorney Richard Baker, who will discuss recent developments in the application of the First Amendment’s free speech clause and their implications for religious expression. Back to Grace Church by popular demand, Rich is a partner at Mauck and Baker, a Chicago-based law firm nationally known for representing churches and religious institutions on issues involving religious liberty. He has filed an amicus curiae brief in Masterpiece Cakeshop v. Colorado Human Rights Commission, scheduled to be heard by the U.S.. Supreme Court on December 5.