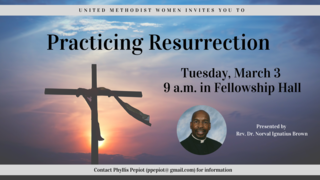 Join us on Tuesday, March 3, in Fellowship Hall at 9 a.m. at the United Methodist Women General Meeting, for a presentation on “Practicing Resurrection” by the Rev. Dr. Norval Ignatius Brown.

The Reverend Doctor Norval Ignatius Brown was born June 17, 1954, the 251st anniversary of the birth of John Wesley. Raised in the farming town Brandywine, MD., outside of Washington DC, Brown heard a call for ministry at an early age. Answering an invitation to Christian discipleship at the age of 9, he began to take responsibility for the life in Christ that began at his baptism.

Brown’s education includes a BA from the University of Chicago, Master of Divinity from Garrett-Evangelical Theological Seminary, and Doctor of Ministry from Chicago Theological Seminary. He holds a certificate in spiritual direction from the Claret Center in Chicago and has been involved in the Academy for Spiritual Formation as a participant, faculty presenter and member of the leadership team. Brown is an oblate at St. Benedict’s Abby in Peoria, Illinois, and he serves on various boards and agencies of the church and community.

Brown has had a variety of pastoral experiences. He has served large parishes and small: African-American, predominantly Anglo and multi-racial, urban and suburban. He has served as a campus minister and an adjunct faculty member at Chicago Theological Seminary. He currently is the pastor of the Christ United Methodist Church in Deerfield, IL. He and his wife Andrea Lynette Brookins reside in Homewood, IL. They are the parents of four children and a Yorkie. They also have two grandchildren.

All women are welcome to attend. The UMW Leadership Team will host the breakfast. Contact Phyllis Pepiot (ppepiot@ gmail.com) for information.